I'll write this post in english because Ann, the lady I've been staying with, and my roommate Sandra wanted the recipe for the empanadas we made this Sunday. The empanadas idea started when, Paul, my boss, came back from observing in Chile last Monday and went into my office with a bottle of pisco (a Control, triple distilled that I would've never thought to buy, but it turned out to be pretty good) in his hand. So decided I'd make some pisco sours for all of us staying at Ann's house (Ann, Sandra from Sweden, Alex from Ukraine and me from Chile) to celebrate that I had found an apartment (yay!) and was going to sign the lease on September 18th.

I pondered for a while about what would be a good dish to complement the pisco sour, plus I wanted to comply to this month's BRBC challenge. First I thought about making choripanes, but without the marraqueta and a longaniza de Chillán, it would've been hard to reproduce the chilean taste, and I wasn't THAT motivated to make marraquetas from scratch (actually, making empanadas might be more of a hassle, so the joke's on me). It's too warm to make sopaipillas. I thought about ceviche, but the one I like is the peruvian version. Finally, I decided to make chilean empanadas, which I've done successfully before in various countries with their local ingredients (I have used empanadas as payment to various chilean friends who have let me stay at their homes for free).

Yesterday, after spending a "lovely" afternoon with Sandra at Ikea looking for furniture for our new apartments, Ann took us to WholeFoods to buy groceries. Pilar from En mi cocina hoy advised me on american cuts that would be appropriate for empanada making, but they didn't have any at WholeFoods that day, :( so I ended up buying lean ground beef, which is the one of the adaptations I made to my dad's recipe. I also used a whole block of butter (225 gr) instead of the 200 gr the recipe called for, because I didn't want to leave a small piece of butter lying around in the fridge.

Now, I know that there are probably a billion empanada recipes around the web stating they are the best, and probably each family has their own recipe, but I'll leave you with our Arriagada version of it. Ann said they were the best empanadas in the whole wide world, which is the critic's review I'm choosing to go with from now on, hehe. I think the best thing about these empanadas was sharing a long conversation about food, our different countries, different points of view and the story of how Ann became a stone carver.


Mix salt and flour in a large bowl with a fork. Cut in the cold butter with a pastry blender, or a pair of knives or forks until the mixture resembles sand. In a small bowl, beat the eggs gently. Make a well in the center of the dry mixture and dump eggs. Gradually mix in water while stirring with a fork or wooden spoon. Use your hands if you have to, but don't handle and knead the dough too much or it will get tough. You may need more or less water, but the dough has to be soft and moist to the touch, and it doesn't have to look very smooth (some traces of butter and/or egg might be visible).
Cover with plastic and leave in the fridge for at least 1 hour.


Fry the meat, garlic and spices until just cooked, about 10 minutes (maybe less). Do not overcook, or the pino will be dry. Cover and set aside.

In a large pan, heat some oil and add onions and salt. Cook in medium heat until caramelized: the onions should look juicy at first and then they'll start to get drier and stickier, and their color will change from white, to transparent, to golden. It took me about an hour so be patient. They should taste rather sweet. This process makes the onion gentle on the stomach ;).

Add the meat to the onions and cook for 2 more minutes. Transfer to a bowl and let it cool, stirring once in a while. Once almost cooled, check for moisture. There should be a little bit of juice in the mixture. If it looks too dry, add a little bit of boiled water. If it looks too juicy, heat it and add a teaspoon of flour. Add the parsley to the cold mixture and reserve.

Cut the dough in pieces and form balls about 6 cm (2.5") in diameter. Roll with a rolling pin into a 25 cm circle, until 3 mm (0.1") thick. They shouldn't be THAT thin. Put a tablespoonful of the beef filling in the middle of one half of the circle. Put 2 olives, 5 raisins and 1/4 egg. Moist the same half by dipping lightly your finger in warm water and brushing the dough with it. Fold the dough in half, covering the meat et al. and press gently on the edges around the meat pocket. Moisten and fold the edges inward, first the sides ending with the flap facing you, pressing on the four corners to seal. It should look like a trapeze. See the tutorial in drawings given by Espacio Culinario for a better reference.

Transfer to baking sheet, brush with eggwash, prick with a fork two times in the center and bake immediately for 20-30 minutes, until nice and golden. Eat and enjoy!


For the pisco sour, I made an americanized version of the recipe a telescope operator has been bragging about for ages. I didn't have pica lemons, so I used the mexican limes you find around the supermarkets here and had to change the recipe a little bit. I didn't use Angostura bitter either, because the liquor store was closed today...


Pisco sour
adapted from Mauricio's recipe for one serving 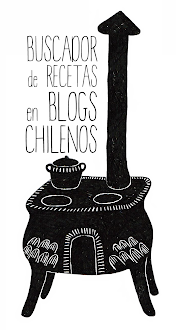